The Bakery Cup in Ballyshannon is one of the oldest club competitions in GAA history. It started in 1957 and continues to the present day with the 2021 final set to take place this weekend. It was initially an U-14 league for the De La Salle school, but later evolved into an Aodh Ruadh U-14 league.

Thanks to the excellent work of Jim Kane, we hope to retrace the competition from its inception in the weeks and months to come. Jim kept many records and, more importantly, most of the photos of the winning teams from his inaugural year.

Over the years, many of the players and captains who participated in it have continued to represent Donegal at all levels. Mentioning one would probably mean leaving someone else out. But across the Democrat’s pages in the weeks and months to come, you’ll see many household names of well-known footballers who have graced the competition.
This week we start with the first three years of competition.

1957
P McGarrigle’s team 2-9
Tom Kearney’s team 2-2
That was the score at the end of the very first Bakery Cup held on June 14, 1957 in Ballyshannon. The competition was for De La Salle School League teams. Tom Kearney had obviously won the competition the year before, but the new Bakery Cup was reserved for the winners in 1957.

The Democrat reported: “Before the game, the respective teams toured the city to the sound of martial music provided by Miss Maureen and Lily Slevin and Tom Gallagher.
In the game, McGarrigle’s side were in good control at halftime, leading 1-6 to 1-1 and a second goal from PJ Donagher sealed the victory. Under the direction of referee Frank O’Donnell, OS, the teams were:

After the final, Reverend Bro Abban presided over the presentation of the trophies, a beautiful silver cup donated by the Ballyshannon Bakery Company and a set of silver medals presented by the ESB staff of the Cathaleen’s Fall and Cliff power plants.
Brother Abban thanked MM McGinty, Ballybofey, manager of the Ballyshannon Bakery Company for the cut.

1958
Frank Kelly 1-6
0-4 by Seamus Darcy
It was only in the dying seconds of what turned out to be a brilliant, spectacular and exciting game that a goal from forward Fergus Gildea sealed the issue in favor of Frank Kelly’s side according to the report. Democrat, who continued:
The teams, to the sound of martial music played by Miss Maureen and Lily Slevin, passed through all the streets of the city, and long before the throw-in, parents and supporters were gathered en masse at Fr Tierney Memorial Park. The teams lined up and faced the flag as the national anthem was played. Reverend Patk McCormick, CC, St Joseph’s threw the ball and what was arguably the greatest school final ever played in the Northwest was underway.
The scoring story was with Darcy’s team starting well with points from Darcy himself, Ken Hayes and Michael McDermott with Frank Kelly responding to leave the score 0-3 to 0-1 at halftime .
Two Frank Kelly free kicks equalized his side five minutes into the second half and he would add three more free kicks for a 0-6 to 0-3 lead. PJ Donagher, in a long free distance, cut the lead before Fergus Gildea’s all-important goal in the dying seconds
FRANK KELLY (capt) (0-6), Pauric McShea, Fergus Gildea (1-0), John Sweeny, Sean Keenaghan, Seamus Martin, Willie Sweeney, Dessie Coughlin, Vincent Ferguson, Jack Downey, Sean Donohue, Eamonn Travers, Patsy Sweeney, Billy Ward, Liam Daly. Subtitle: Michael Crawford.
SEAMUS DARCY (capt) (0-1), Paddy Joe Donagher (0-1), Eddie Donagher, Michael McDermott (0-1), Sean O’Reilly, Ken Hayes (0-1), John McGahern, Jim Downey, Cathal Gallagher, PJ Lynch, Sean Crawford, Michael Travers, Terry McIntyre, Fergus Lawlor, Christy Boyce. Subtitle: Rory Canning. 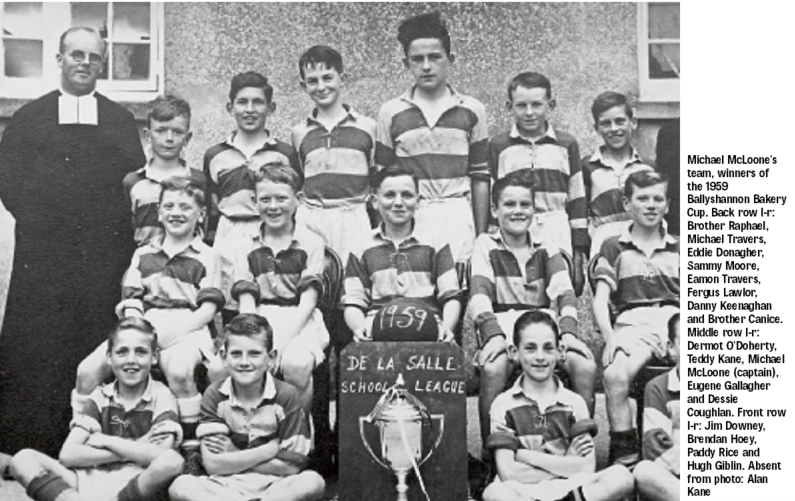